See all the photos at the link below
http://wisertime.zenfolio.com/
Posted by Wisertime at 1:27 PM No comments: 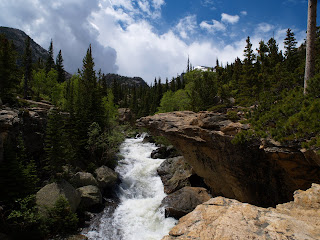 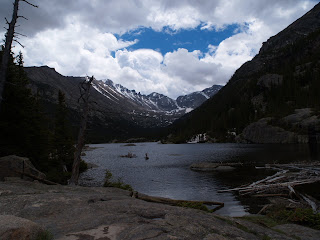 I stopped in Boulder, CO and took a tour of the Celestial Seasonings Tea factory, which was fun and impressive. I really love their teas and it was just a very short detour. The neat thing about it was that as you walked past the different herbs, you could smell each new scent and it was quite pronounced. Hibiscus especially is a favorite ingredient. Then they had a closed off room just for the mints (spearmint, peppermint and one or two other). Wow those were so strong you could feel it in your nose and lungs. If you had a stuffy nose going in, it would surely clear up in just a few minutes. It must be kept behind closed doors to prevent it from permeating all the other herbs. Then the rain and lightening came and pelted me all the way to Denver.
Posted by Wisertime at 7:51 PM No comments: 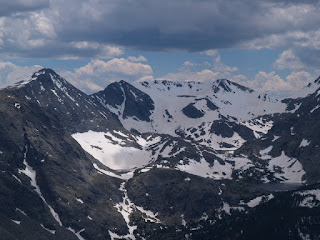 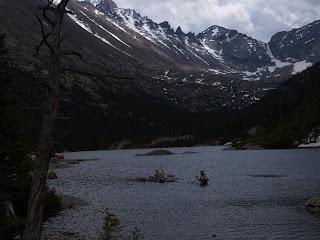 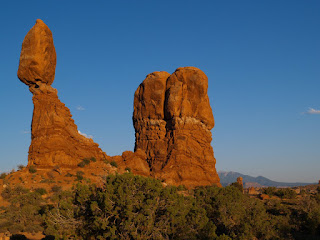 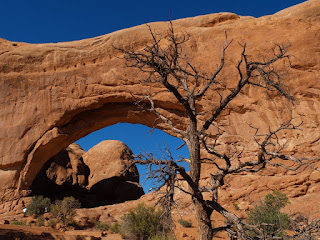 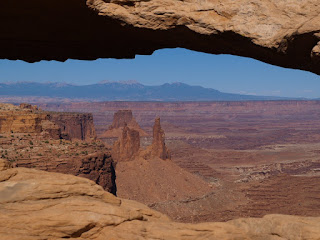 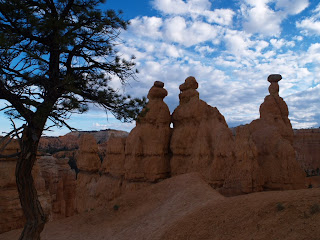 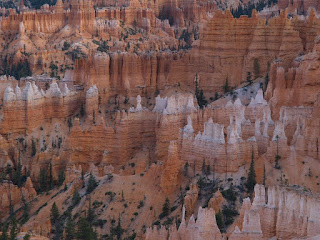 Bryce
I am playing catchup as I have had limited access to blog or type with precious battery power. Bryce was basically what I expected. Zion was a tough act to follow. I had only planned to spend one day/night there, but because I was so exhausted from too much activity and the strenuous Angel's Landing hike I needed an extra day to just relax and take it easy. I did take a lot of photos, but found it difficult to get really great shots at Bryce. The lighting dynamic range was often too wide to capture as I wished, the angles were not just right and part of the second day was driving alot to see the various areas along the 16 mile or more drive. Most were not as impressive as the main sections near the entrance. I did not hike the first day, I caught up on some things and met some interesting people that I spent time talking/socializing with, one of which was even from Durham and working at the campstore. Small world indeed. I compared trip notes with a man from Germany (currently living in LA), who was seeing many of the same places and also doing alot of photography, and we each suggested other places to see and visit. In trying to find the astronomy talks and stargazing centers, I also stumbled into another Bryce employee who was also lost in the pitch black star filled night trying to find the same thing and we teamed up to located the telescopes and shared alot of intersting conversations along the way. It was nice to finally have some interesting company on the long solo journey and get some insights into seasonal working and share some snarky humor too.
Finally, after weeks of waiting I was able to see the Milky Way Galaxy at Bryce, far from the polluted city skies. What an amazing site. Now I can get just a little incling what it must have been like for the ancients and native americans to stare at the beautiful star filled night sky. I hoped to get some long exposure photos done, but got too tired and cold late at night after the activities to give it a go, knowing it is a trial and error kinda process. I may try tonight at Capitol Reef. Now proclaimed the best stargazing site in the Continental US according to the Ranger at the Visitors center.
I had pretty good weather at Bryce. Just a little of the shadowing rain that I can't shake, but nothing severe. IT does get cold there after midnight, but I kept warm in my sleeping bag. Bryce was somewhat reminiscent of the Badlands, but on a bigger scale maybe and you could not drive through it like you could in SD, which is a really cool experience. You can see for over a hundred miles in places though. Sadly I had the most obnoxious campers nearby. One foreign couple with a child that just never would stop crying/whining and they never seemed to try to stop it. A family of five with 3 kids, 5 bikes, 5 chairs, 3-4 tents and buttloads of stuff packed in and on top of their king sized SUV. I saw their pack laid out the day I left and don't know how they ever fit all that crap in one vehicle. Then hordes of kids running and screaming like mad. It is becoming epidemic lately with crying and misbehaving kids everywhere. Not to mention the tour busses that pour into the parks and clog everything up immediately like a flash flood of senior citizens.
Posted by Wisertime at 8:56 PM No comments: 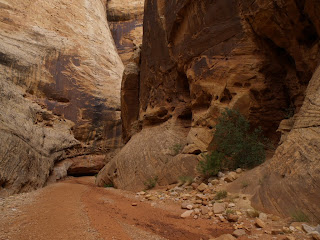 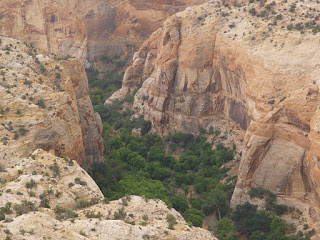 Posted by Wisertime at 8:47 PM No comments: 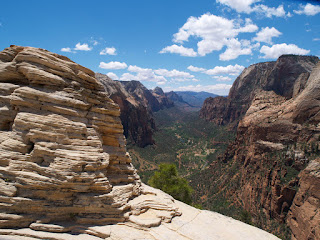 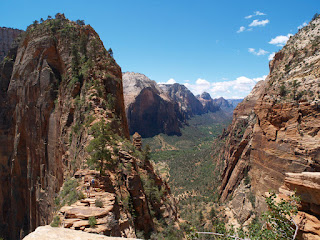 Zion is an amazing place. I will leave out the boring details. Suffice it to say Utah has a lot of open space and dramatic scenery. THe entrance into Zion was beautiful. Towering cliffs eroded with time, similar to what you would expect at the Grand Canyon I assume. There are some residential towns around and outside Zion, which is interesting, since it is pretty remote. Nice climate and very dry (though of course the rain found me again on two days). It was a refreshing cool down anyway. The canyon walls and monuments are beautiful and awe inspiring. Camp is situated right inside the canyon, with great views and shelter, though a breeze blows pretty constantly. On my last day I decided to attempt the Angel's Landing hike. It is world famous, strenuous and steep with a climb of 1400 vertical feet in 2.5 miles, with views of the entire canyon valley. There is one section of 21 short steep switchbacks to get up to scouts lookout. It was tiring to get there along, but there is still another trecherous half mile climb to the summit, which sits alone in the middle of the valley floor with 1200 foot drops to the floor. At one point about 3 feet wide you have 900 and 1200 drops on each side, with a chain to hold on to. This is where most people turn back.

The view ahead is intimidating and fearful to say the least. As I said to some fellow hikers (or should I say climbers?), I don't have a fear of heights, but I do have a fear of falling. I got over to the thin crescent shaped monolith and seriously considered turning back myself, but the hike up was work and I made a good pace and thought this was a once in a lifetime experience and decided to push on and take the risk. It looked like it would be harder coming down actually. Fine powdery dust on sandstone and limestone rocks, small footholds and lots of chains to hold on to. I held on to them with dear life and sweaty hands going all the way up. All the while asking myself, "am I crazy for doing this?". It was a slow climb, with people coming down, people changing their minds and unsure of themselves. Even some small kids made the trek, as well as older people. Stopping to wait for people to pass was a good excuse to catch your breath or take a drink of water. It was in the 90s and sunny with a stiff breeze all day. I think it was best to go early or late for this hike to avoide the crowds. The views were spectacular and of course, once you are up there, you can say it was worth it and highly recommend it to those without a fear of heights. On every edge you can stare down at the valley floor and river with dizzying stares. I took a well deserved rest, had a snack and shot some pictures and talked with some others I met on the way up. The hike down was surprisingly easy comparitively and I made the entire trip in about 3.5 hrs. My legs got wobbly and I am sore today from alot of activity. Of course, I forgot my walking sticks I got for xmas, which would have made the walk down easier on the lower half. I took the shuttle back to my car and headed on to Bryce Canyon. The first leg of the trip took me through a pitch black mile long tunnel, with occassional windows. It was hard to see without brights on after coming from the bright sunlight. The east side of Zion was just as spectactular, but different types of formations. I wish I had budgeted time for a hike on that side, but I had my mind made up already.
Posted by Wisertime at 1:08 PM 1 comment: