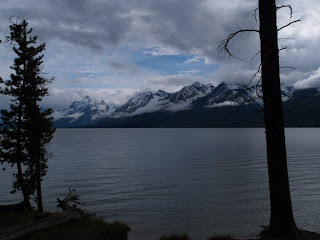 Well, this is in hindsight, so I will write an abbreviated version, as I have been offline for 5 days and turned Grizzly Adams, beard and all (now gone finally). After a rainy night in Meteetsie camping, I got up early and headed to Yellowstone. I found a great 25F sleeping bag at Kmart in Cody, WY for $20. Best $20 spent yet on the trip. Now I no longer get cold camping and its actually quite cozy, so I am able to sleep later in comfort. The drive up was pretty (despite what some woman told me). I had to bypass going the beartooth hwy as it was closed due to snow. This drive was nice. I stopped at the Damn, which was quite impressive and spewing lots of water due to the heavy rains and snow. It was cloudy and drizzly coming into Yellowstone and many RV's ahead of me. It was not intially impressive, since I couldn't see the peaks. The lake was ok, with thermal areas on the shore, but not unlike any other lake I have seen. Once I got near the Canyon area to the North, things got more interesting. I saw lots of Bison and that was a continuing theme throughout the park. Many near the roads. I stopped at some smaller geysers and mud pots and went to check out the campsites. I also took a side route to view the upper falls. The close up area was closed due to a rockslide as were many other trails due to high water. The falls were gushing for sure though. As I passed Canyon I passed some high peaks above the pass. The views were great and all the peaks were covered in recent snow.

I ended up in Tower campsite, which worked out nicely. Primitive, but I had a great campsite with a bit "lot" in the woods, with plenty of firewood around and overall quiet area on a hillside. Just down the road was a general store and trails to view the Tower falls, tower, and the beautiful canyon. Also close by was Roosevelt lodge, which had showers and a cute dining room. I didn't eat there, but did "borrow" their shower a few times, which was nice. I ended up staying 3 nights since I had one of the two best campsites and location was convenient, weather was sunny and warm (relatively) and most importantly DRY! I was also close to Lamar valley for wildlife viewing, but I am not patient enough to sit around with a scope to view it hrs on end.

2nd day I went over to Mammoth springs. Just 18 miles West it was a whole different climate and scenery (a common theme here). It was sunny and dry and warmer than the other areas. Slightly lower elevation and in a rain shadow apparently. Most of the springs were dried out, but still some impressive sights. I stopped in Gardiner MT just 4 miles down the canyon and Yellowstone river to grab some groceries and check out some of the shops and get a picture of the famous North Entrance, inspired by T. Roosevelt. I did the upper loop (70 miles), checking out some geysers, hot springs etc. There is a lot of beautiful scenery all over, but its a little exhausting having to get in the car and drive/stop, drive stop, etc. Everything is spread out here and most of it is "roadside". There are alot of restrictions on where you can walk too. Less trails than most parks, but if you look hard enough you can find them.

Day 3 I heard the beartooth pass was open and decided to see the NE entrance and drive to the pass summit, which was approx 75 mi each way though contruction delays and torn up roads. This part of the park was full of wildlife and high peaks. Prob fewer people view this part of the park then most areas too. The drive to the pass was pretty and varied in terrain, climate, scenery. I started to wonder if I was wasting my time though, but then finally I started to get to the upper elevations, I had pictured in my mind. Everything was blanketed in snow. Lakes frozen over still, but beginning to melt with circles and ovals of aquamarine showing through the snow. Then to the pass itself, a series of switchbacks up to a white heaven. The views from the middle section to the two summits were nothing short of spectactular. You could see in all directions as far as the horizon would allow. Mt Ranges far east and south in WY, West in MT and the lower, warmer sections of Montana near Billings. I hiked up to one of the summits in 2 feet of snow, where there was a weather station to get the full view not seen from the road. Stopping often to catch my breath and eat some refreshing corn snow. The pass itself is 11,000 ft. It looks like you are in the himalayas. White peaks stretching all over. Barren rock and snow, 4-10 foot walls of freshly plowed snow on the sides of the road and to my surprise a ski lift at the summit! I had read about skiing up here, but that was walking uphill to ski from what I read. I had no idea they had a ski lift up there. Turns out they use a portable generator to power it. It is only open a little over 2 mos a year for the die hards to ski in June & July.

Anyways, pictures cannot do this place justice. I stopped often to admire the views and had a great day with sun and scattered clouds. This is the most beautiful scenic hwy I have ever driven. It is listed as one of the best. The other I did last summer, also in MT. at Glacier called the Going to The Sun Road (GTSR). Both were fantastic, but this one was even more amazing and twice as long (and I didn't even drive the lower MT half). This is a drive you must take in your lifetime. Once I am home I will try to stich together some panorama photos, but I doubt they will replicate what I saw.

On the last day I visited Lower falls, that I missed coming in. I really wanted to climb Mt. Washburn up to the firewatch, because it had a panoramic view of the park and mts to the east in WY, but this would have been an all day affair and tiring, plus I had some sore feet and beating the views of the Beartooth hwy would be near impossible, so I decided to pack up camp and go to Old Faithful and the southwest part of the park. I also had some annoying new neighbors in camp, and I couldn't stand another night of them. The kid even brought an electric guitar...To a campsite! If he could play any good, I might not have minded, but he knew about 3 notes it seemed.

I forgot it was Saturday. That and the fact I was going to old faithful, meant one thing. Crowds. I passed a few stops, because there was no parking and lines to bathrooms and tons of obnoxious kids and busses of tourists. Old Faithful itself was witnessed by probably 1000 people while I was there. It did not disappoint, though about 10-15 min late. There were many other interesting thermal features scatterd over miles around the lodge and less visited by the masses.
I noticed at least one soda bottle in a spring. People are so stupid. The morning glory pool was ruined by people throwing coins and objects into it over the years too. The biggest disappointment was the Grand Prismatic spring, which couldn't be seen in its gorgeous entirety, because of the steam and the boardwalks were not raised enough to see it from a higher angle.

West thumb had some good features lakeside too, as well as views of white peaks accross the lake, that I could not see entering the park. Rain was heading this way though. I went to find a campsite only to find out they were not open yet on that side of the park, which meant driving back to parts I had seen or didn't care to see. It was raining anyway, so I decided to go to the Tetons early and camp there since I was just 25-35 miles away from where I was. The south side of Yellowstone was less impressive and badly fire damaged. I was surprised how much fire damage was all over the park. It was very dark and cloudy to the South.

I ended up at Colter Bay campgrounds, which had just 4 sections of about 20 open...still wet and rainly, but some holes in the sky. I had to set up camp in the rain and managed a short fire with some dry pine under a tree nearby. I went down to the rock beach before the sunset to get a glimpse of the tetons I had seen driving in partially surrounded in clouds. Luckily I did this, because the next am it was still raining and the peaks were not visible. Just the lower couple hundred feet. Everywhere in sight was low clouds and rain and not expected to change for over a week. Seems I picked the worst June on record for travel out west. Everywhere I have been had unusually wet cold weather. I did get lucky for 3 days in the Tower area though, but I guess that was isolated. Even Salt Lake and Denver are getting drowned in rain now and have been for a week.

I was not gonna hang out in the clouds, so I pushed on to Utah. Jackson, WY was a cute little town with lots of shops and restaurants and bars with a western mountain feel. Definitely a place I would like to revisit. The sun peaked out there and to the south along the snake river. A long drive down 89 in WY and into Idaho was nice, but the tiny towns with 25 mph limits got old fast. You start to realize just how isolated some of these places are, for better or worse. ID was warm and sunny. I drove past Bear Lake (assuming its manmade), which had a striking aquamarine color to it. Sandwiched between two ranges that ran all the way to the horizon in both directions. I stopped to take some photos, but the beaches/shore areas all seemed to be privately owned. The view from the pass was very nice again. The drive into UT was gorgeous and a very long downhill drive. It had to be at least 30 mi downhill from the pass. It seemed never to end, just like the river along it. Finally, I landed on the outskirts of Logan UT to an amazing spectacle. I lush golf course on one side of the road with peaks towering behind it and a big open valley sandwiched by 3 different ranges. I could see the storm clouds to the South and you could see the patches of rain coming down. Logan seemed partially vacant and many businesses were closed or maybe even vacant. This town looked hard hit by the recession. Its also Mormon country, so I imagine many places are closed on Sunday's. The Wasatch range just dominates the scenery, contrasted by the flats to the West and secondary ranges sillouhetted by the setting sun. Rain got worse as I neared Ogden. Definitely unusual wanky weather here.
Posted by Wisertime at 12:21 AM